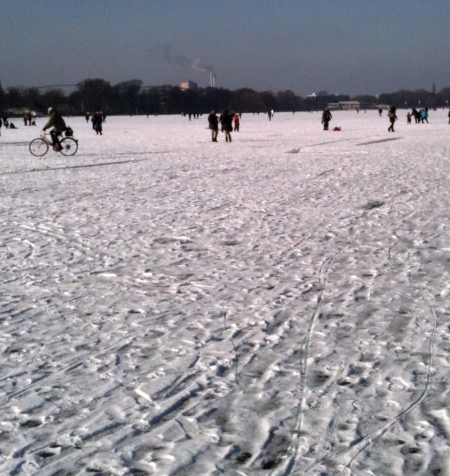 The big news in Hannover this week is that the Machsee, the man-made rectangle lake in the center of the city (which is way cooler than my description), is officially frozen over enough to play on. For days the buzz everywhere was “How many centimeters? How many centimeters?” because the city officials have to measure it to decide when it’s safe for all that weight. It makes me think of Thoreau going on about testing the ice on Walden Pond.

When the Machsee ice isn’t yet thick enough, they actually have police going around to make sure people aren’t on the ice. If you are, you can be fined, and if you fall in, you’ll be charged for your rescue.

Wednesday was the first day it was thick enough—16 cm, I think–and the word on the street was “Der Machsee ist frei!” (The Machsee is free). The sun was out, it wasn’t too terribly cold, and it felt like a big party on the ice. People brought out their ice skates, their hockey sticks, you name it.

My son (4) rode his bike on it and also dragged around a big stick making drawings in the thin layer of snow on top of the ice. It was pretty great. One of those days when winter is really cool.

Here’s an airplane he drew below. He’s at this fantastic stage where his drawings are getting more complex and he’s still completely fearless about tackling whatever he wants. No “I can’t draw.” 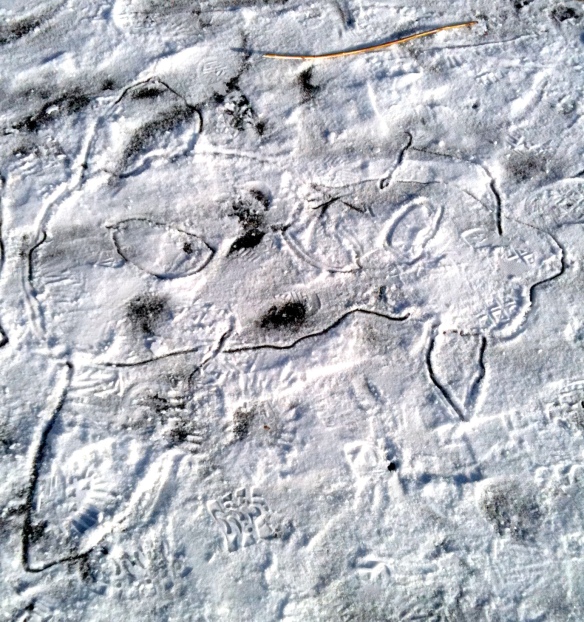 In other news, it’s been a slow writing week, though maybe it’s an ideas week. I’ve been reading and mulling things over and finding little openings to take my story into deeper territory. Thanks for all your comments on the Less Meat post. Have a great weekend! 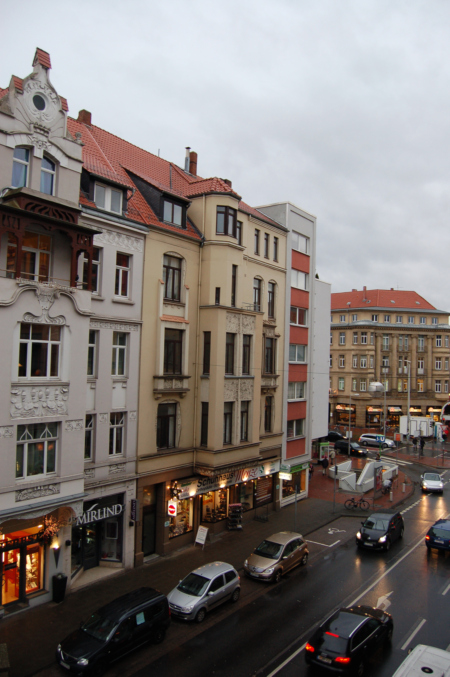 It’s that time of year again, when the German sun sets at 4 p.m. in a blanket of gray, and even a candlelight lunch doesn’t seem like a ridiculous idea.

In this season I always think of a poem by my friend Etta, and today she’s agreed to share it with us. Thanks so much, Etta.

There is never enough light in winter.

Even in the room you chose

for its double window,

I imagine you at your desk

what morning light there is.

You have made me think about winter.

how the sun is closer to us

but its light is less:

that my science can explain but not excuse.

A tilting on the axis,

a simple change of wavelength,

hardly seems enough to cause

each star a perfect prick

through your thick curtains.

Etta and I have been friends since first semester of our freshman year, when we took poetry with the late, great Robert Kirkpatrick. After that class, I became an English major and never looked back.

With so little light, I’m grateful to have the tree up and the advent wreath to light each day. Did you know German tree stands hold no water? We learned that this week. It’s traditional to get your tree on December 24th and to keep it up until January 6. Trees are cut much closer to the time of sale, so they don’t really need watering during that short period, I guess. We brought our American tree stand, so we’re watering ours anyway. Some habits die hard.

I love this idea for a children’s Christmas tree over at elsiemarley, and also check out her list of Christmas activities to do with the kids. I especially like this woven ornament idea from the crafty crow.

An editorial about amazon’s sneaky new promotion. But hey, hardcover book sales  in stores are up!

Also, I’m making progress on the sleeves for this. Maybe, maybe it’ll be done in time for Christmas. But I’m not above wrapping it up in pieces. Watch me.

Also making progress on my novel and trying to get an old nonfiction writing project restarted. Back to work. 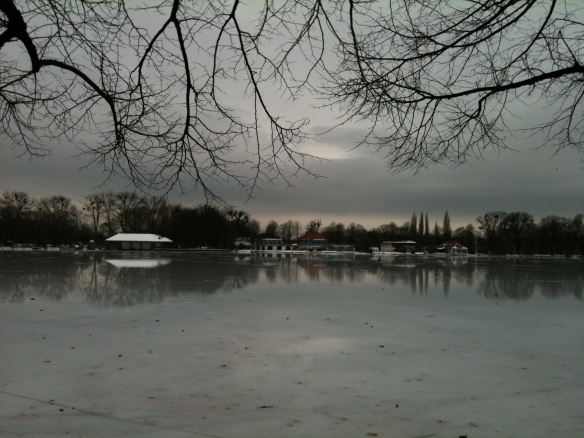 Sunny hours in winter are hard to come by here in northern Germany. One thing that helps is my almost daily walks by the Machsee (mach is pronounced MOSH  as in mosh pit. See is pronounced SAY, approximately). It’s always good to get some fresh air and exercise, and it’s on these walks that I see how beautiful winter’s gray, stark landscape can be.

The first picture above is from a day when it was raining on top of the frozen lake, giving this great moodiness and wonderful reflections. One thing I’ve noticed about gray is that it allows the subtlest colors to show off. On this day the ice looked a soft turquoise and the sky a yellowy-pink next to  purplish clouds. 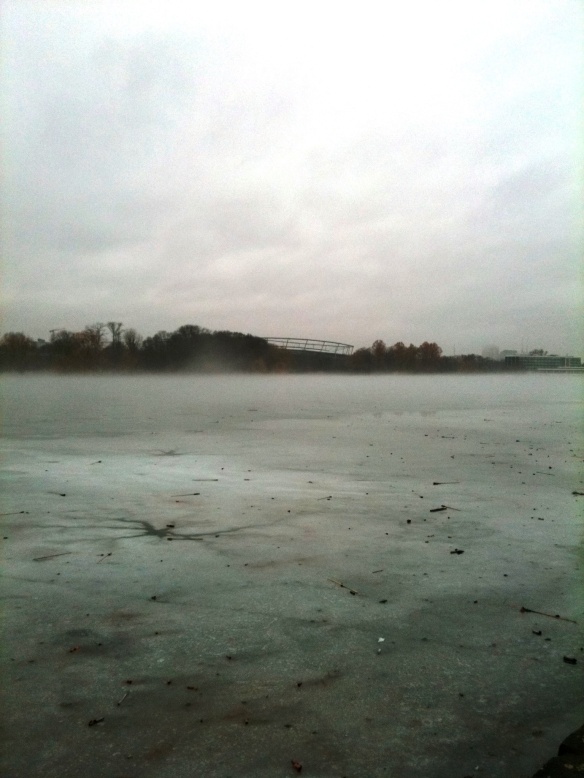 This one was taken on a foggy day when it seemed some mystical being might travel across the ice our way.

Here below is the ice from that day, looking blue and brown and wounded: 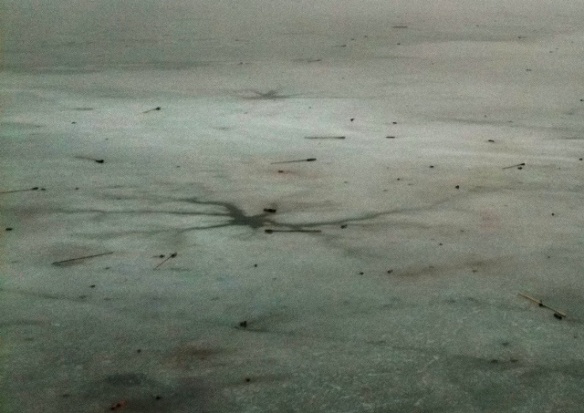 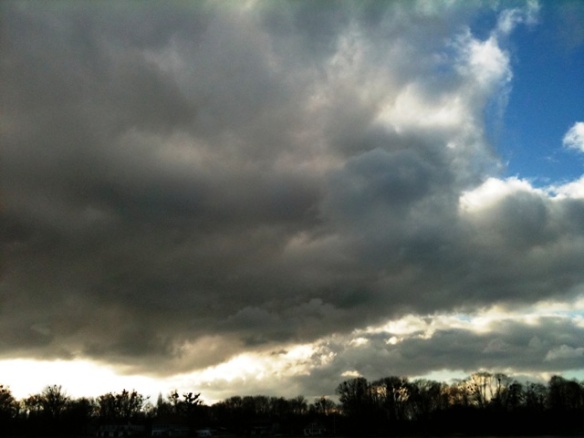 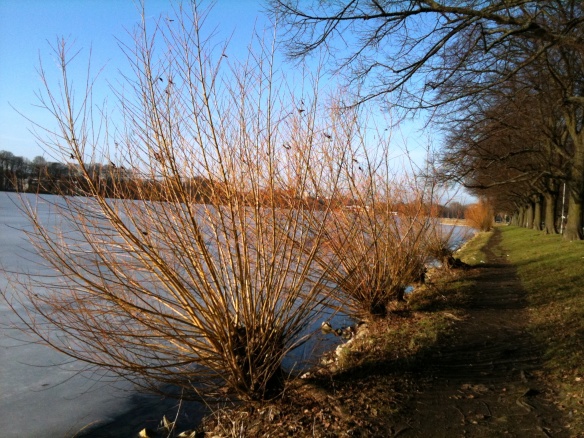 And here above, sunshine! The yellowish color of these bare branches just glows up against the ice.

Luckily we’re getting a little more sunshine in these parts this week, and the daylight hours are increasing.