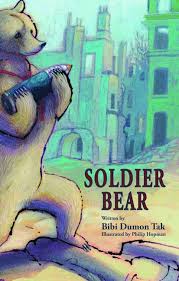 Congratulations to the winners of the ALA awards, especially to my friend Laura Watkinson, who translated Soldier Bear, winner of the Batchelder award, the best work of translation of the year. Wow!! Soldier Bear was originally written in Dutch by Bibi Dumon Tak. It tells the true story of an orphaned bear cub adopted by Polish soldiers in Iran during World War II. Can’t wait to read it.

It’s always exciting to find out the winners, and this year I was totally psyched to see Laura so honored. To find out more about Laura, check out her website here. She lives in Amsterdam, and we met through SCBWI.

I’m also so pleased to see two former Vermont College instructors winning the Newbery and the Caldecott: Jack Gantos for Dead End in Norvelt and Chris Raschka for A Ball for Daisy.

Coming up: a dyeing project and an interview with app developer Sarah Towle.

The other day I was speaking in German to another parent at my son’s kindergarten. It’s a great place for me to try out my language skills because the people are friendly and patient.

I was making (admittedly boring) small talk, trying to tell her that I had been shopping for dishwasher detergent tablets, but I didn’t know the word, so I made do. I said I had been shopping for “plate soap” or teller seife. Of course this got me a friendly laugh, but she knew what I was talking about and then taught me the right word(geschirr- reiniger tabs).

It got me thinking, though. Trying to communicate in another language makes you think of new ways to get your point across. The important thing is making yourself understood. It’s  similar  to when I’m speaking with someone who doesn’t know a lot of English. I can’t always use my “English major” words. I have to use simple, direct words, and using a limited pallette can lead to interesting things.

So here’s the writing exercise:

Take a section of text, from your own writing or from a book, and rewrite for someone who doesn’t know a lot of English words. Another way to think of it is to turn the text into an easy reader. The idea is to think about the words in a new way. Shades of meaning will be lost, but you might gain a new perspective.

Here’s my attempt at “translating” the first paragraph of Dicken’s Our Mutual Friend. First, the original text:

In these times of ours, though concerning the exact year there is no      need to be precise, a boat of dirty and disreputable appearance, with two figures in it, floated on the Thames, between Southwark Bridge which is of iron, and London bridge which is of stone, as an autumn evening was closing in.

The figures in this boat were those of a strong man with ragged grizzled hair and a sun-browned face, and a dark girl of nineteen or twenty, sufficiently like him to be recognizable as his daughter.

One fall night there was an ugly, dirty boat floating on the Thames River. The boat was between two bridges, one of metal and one of stone.

One person in the boat was a strong, rough-looking man with a tan face. The other was a young woman with dark hair. She looked like him. She must be his daughter.

Variation: Re-name everything in your kitchen according to the same rules. For example, the microwave could be renamed the quick-cooking box. Interestingly, the German word for refrigerator is Kühlschrank, which literally translates to “cool closet.”

Blasts from the past 🤔 #artstudent 😉