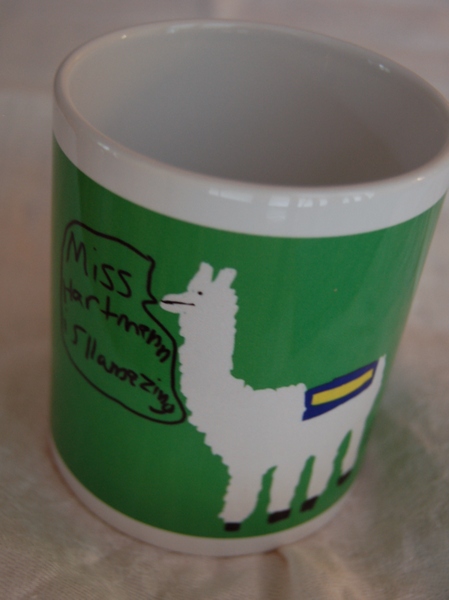 Well, I didn’t mean to be gone all summer, but it was a little busy. How was yours?

This project was actually an end of year gift for a very special teacher who happens to love llamas. My son was always drawing llamas and writing llama sentences for extra credit, so we decided her gift would be made from one of those drawings.

I took his drawing above, took a picture with my iPad and imported it into a drawing/ painting app (Procreate—yeah, not the best name but a good app). He used the stylus to “trace” his drawing and fill it in, and he chose the green background.

I uploaded the image into Shutterfly to have the mug made. We were really happy with how it came out. If anyone has suggestions of other places to have artwork turned into gifts, I’m all ears. I actually wasn’t that impressed with the variety of options out there.

What are you watching and reading? Currently I’m into Al Franken, Giant of the Senate. Somehow it’s just what I need to unwind in the evening. Movies: loved Wonder Woman and especially The Big Sick (an indie romcom, if you haven’t heard of it). As for tv, I got really into Grantchester and Poldark over the summer, and have just started watching Hinterland. It’s good but it’s a little too creepy sometimes, so I can’t watch it too late at night. Also just finished Anne with an “E.” Let’s discuss. Spoiler alert! Consider yourself warned.

I have mixed feelings about Anne with an “E.” The casting, acting, sets, costuming, and cinematography are all really top-notch, but I’m not loving the giant liberties they took with some of the story lines. Especially the fact that they make Anne’s trial run with the Cuthberts so high-stakes. It makes Marilla and Matthew look like heartless, cruel jerks just for the sake of drama. And the whole losing the farm thing and Gilbert’s family situation and the shady characters coming in at the end. Come on! The books were never about major dramas, for the most part, and it doesn’t feel true to them to up the ante so much. Also it kind of kills me that Rachel doesn’t make the dress with the puffed sleeves. That was the thing that really made Marilla crazy about it! You can probably tell I’m a devoted Anne of Green Gables fan. I’m definitely feeling the need to introduce the kids to the older series (with Megan Follows and the dear late Jonathan Crombie). But despite the writing shortcomings in Anne with an “E”, it was fun to watch, too.

Anyway, in the comments, tell me what you thought of it. I’d also love recommendations for other shows and books.

My firstborn starts kindergarten this week. For the teacher’s back-to-school luncheon, I was drafted to create a decoration for the tables. I prefer decorations that are useful, reusable, or recyclable, so I came up with something simple using school supplies that the teachers could then use in their classrooms.

I started with a straight-sided vase. In the center are three rulers tied up with a ribbon. Around that I arranged a rubber-banded bundle of markers, then wrapped the bundle with one flat strip of paper and one fringed strip, both in blue (the school color). Around the marker bundle I just stuck in a bunch of pencils, and they began to fall in that fun arrangement.

Copy edits are in on Slowpoke. Next I should get a peek at the artwork!

All photos and text on this blog are the property of Emily Smith Pearce. Feel free to link away, but please do not use any photos or content elsewhere without my permission. E-mail me if you have questions at emily (at) emilysmithpearce (dot) com. Thanks!
Loading Comments...
Comment
×