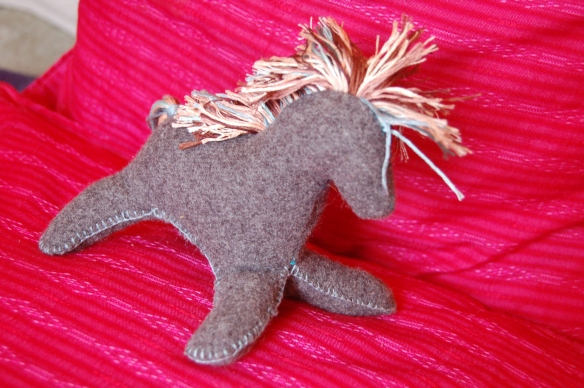 These friends arrived in stockings on Christmas morning, and I have it on good authority that Santa’s elves used the German pattern book mentioned in this post.

Also, the elves had a brainflash—thrifted wool slacks + washer/ dryer = luxe crafting felt! Though they’d done it many a time with sweaters, this was a first with wovens, and it worked like a charm.

The front legs are a little funny, but the kids don’t seem to notice so I won’t tell. Horses were a theme this year, with both kids being addicted to the Secretariat movie, among other horsey things.

More gifted crafts to follow, and also, I’d love to see you at my book signing on Saturday, January 26 at Park Road Books here in Charlotte. There will be snacks! I’ll be signing copies of my early reader titled Slowpoke. More info about the book here. 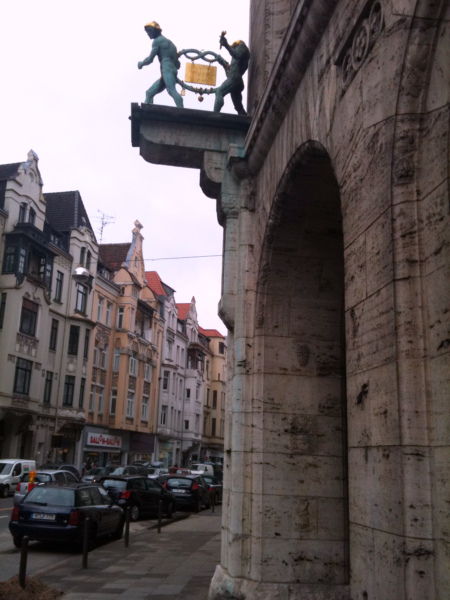 Thank you, people of Hannover, for hosting us. It wasn’t easy in the beginning (two short years ago) but we’ve learned so much, done so many new things, and we’ll always think of our friends and our time here fondly.

I wish I could write this good-bye in German, but I’m not quite there yet. Vielen dank, Hannoverians, for listening to my broken German. What a shock that you actually understood me, and even better, that you wanted to understand me. Thank you for your patience—-may I be just as patient with every new English learner I meet.

I had no idea what a whole new world was waiting for me behind that language barrier. Thanks for opening the door wide when I so timidly began to knock.

It’s been exhausting saying good-bye to everyone, knowing that we can’t pop back over for a quick “hallo!“whenever we like. But I do hope we’ll be able to get back here.

I was reading Little House on the Prairie to my kids not long ago, and this passage from one of the last chapters (“Going Out”) really struck me:

“Then Pa hitched Pet and Patty to the wagon. Ma climbed to her place on the seat and held the lines. And suddenly Laura wanted to see the house again. She asked Pa please to let her look out. So he loosened the rope in the back of the wagon-cover, and that made a large round hole…

The snug log house looked just as it always had. It did not seem to know they were going away. Pa stood a moment in the doorway and looked all around inside; he looked at the bedstead and the fireplace and the glass windows. Then he closed the door carefully, leaving the latch-string out.”

Off to say some more good-byes. See you in America! 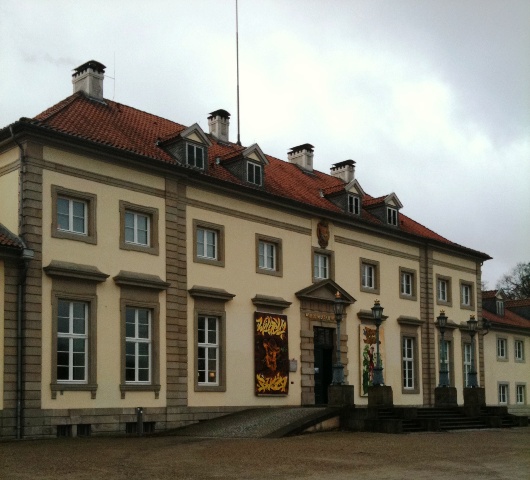 This is a German expression, said at New Year’s, which means, literally, “a good slip” into the New Year. I’m guessing it has something to do with the icy sidewalks.

We just returned from a wild and woolly trip to the U.S. We started out with a 33 hour snow delay and an ear infection, and ended with bronchitis and a splinter in a hind quarter, enlivened in between by hand, foot, and mouth disease and a scary-looking eczema flare up.  Not all for the same person, thankfully. Whew!

Despite the challenges, we had a really nice visit with our families and a few friends (please do not be miffed if we did not get to see you, as it was a really packed trip mostly focused on family).

Things I enjoyed in the U.S., besides, of course, visiting with loved ones and cheap consumer goods:

Things I missed about Germany while we were gone, besides our friends:

I was a little sad at takeoff in Charlotte, but as my husband says, I must be happy to be home, since I’ve been singing and dancing around the apartment and laughing at bad jokes. Currently feeling that New Year’s itch to re-organize, purge old stuff, and feather the nest. I’ll be back here soon! 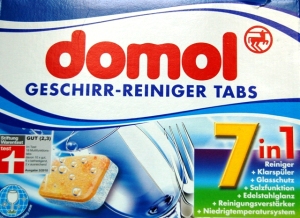 The other day I was speaking in German to another parent at my son’s kindergarten. It’s a great place for me to try out my language skills because the people are friendly and patient.

I was making (admittedly boring) small talk, trying to tell her that I had been shopping for dishwasher detergent tablets, but I didn’t know the word, so I made do. I said I had been shopping for “plate soap” or teller seife. Of course this got me a friendly laugh, but she knew what I was talking about and then taught me the right word(geschirr- reiniger tabs).

It got me thinking, though. Trying to communicate in another language makes you think of new ways to get your point across. The important thing is making yourself understood. It’s  similar  to when I’m speaking with someone who doesn’t know a lot of English. I can’t always use my “English major” words. I have to use simple, direct words, and using a limited pallette can lead to interesting things.

So here’s the writing exercise:

Take a section of text, from your own writing or from a book, and rewrite for someone who doesn’t know a lot of English words. Another way to think of it is to turn the text into an easy reader. The idea is to think about the words in a new way. Shades of meaning will be lost, but you might gain a new perspective.

Here’s my attempt at “translating” the first paragraph of Dicken’s Our Mutual Friend. First, the original text:

In these times of ours, though concerning the exact year there is no      need to be precise, a boat of dirty and disreputable appearance, with two figures in it, floated on the Thames, between Southwark Bridge which is of iron, and London bridge which is of stone, as an autumn evening was closing in.

The figures in this boat were those of a strong man with ragged grizzled hair and a sun-browned face, and a dark girl of nineteen or twenty, sufficiently like him to be recognizable as his daughter.

One fall night there was an ugly, dirty boat floating on the Thames River. The boat was between two bridges, one of metal and one of stone.

One person in the boat was a strong, rough-looking man with a tan face. The other was a young woman with dark hair. She looked like him. She must be his daughter.

Variation: Re-name everything in your kitchen according to the same rules. For example, the microwave could be renamed the quick-cooking box. Interestingly, the German word for refrigerator is Kühlschrank, which literally translates to “cool closet.”

I can finally share some big news now that it’s totally official. My family and I are moving to Hannover, Germany for a few years. It’s all very exciting and a little crazy! I’m sure I will find all kinds of new things to write about and our time will be full of adventures.

We will arrive in Hannover in April. I’ve been taking German classes—-it’s very interesting to learn how closely related it is to English. And boy, it sure has been giving my brain a workout, which feels great. It had been awhile since I was an official student of anything.

The “mongust” (my kids’ word for humongous) suitcase above was given to me in 1999 when I moved to Boston with it and not much else. It’s so huge I can’t say I get a lot of use out of it, but for crazy-far moves, and I’ve made a few, it surely comes in handy.