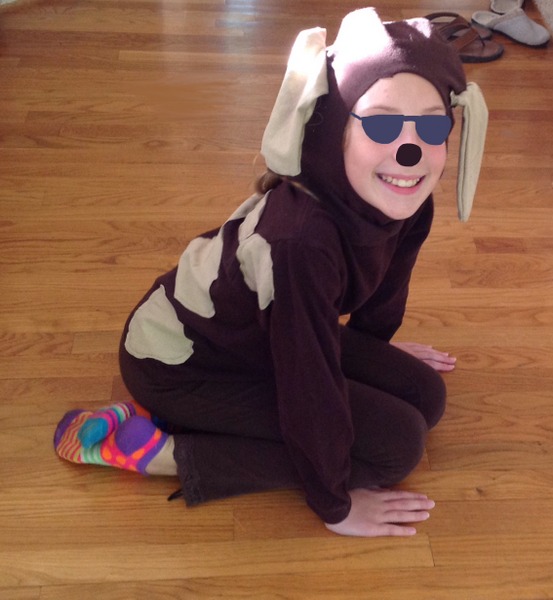 I meant to photograph the finished version of this, but I ended up being too distracted to do it. This was for the church spring play, and the final included a tail stiffened by a sliver of milk jug inside it.

The ears here are just pinned on, but I swear I did actually sew them to the headpiece.

The costume is made up of Goodwill items: leggings, T-shirt, with light brown T-shirt spots, plus a balaclava-type “hat” out of more T-shirt pieces. The headwear is very similar in concept to the knight helmets and ninja “hats” I’ve made in the past.

For the ears, I just made two tubes with rounded edges, then sewed them on the balaclava pointing up so that the stitching is tucked unseen just under the ears. This detail gave them just a little bit of oomph so they hung well, with a lot of personality.

My little model here was in the play but wasn’t actually the dog. Our friend who did play the dog totally rocked it out. Everyone worked so hard and did a wonderful job. I was proud to contribute and to have two young actors in the family, as both my kids were in it this year.