Do you try new foods when you travel? One of my favorite ways to check out a new place is to eat my way through it.

It wasn’t hard to do in southern Spain, where there are so many delights. For example, gazpacho:

My goal with gazpacho was pretty much to eat it at nearly every restaurant, until I really couldn’t eat it anymore. I mean, where else can you go where gazpacho is on every menu? You can eat it in a bowl or, like here, drink it in a glass. You can also eat a thick version, like a dip, though I have to say that was not my thing. This was one of my favorite gazpachos, at Bar Manolo in Seville at Plaza Alfalfa.They had the most awesome cheap tapas. Loved the outdoor cafe culture in Seville. It has such a fun, laid-back feeling.

Another quest was churros. We had trouble with this one, since churros are really a morning thing, or a break-of-dawn-after-late-partying thing, and we never seemed to motivate to go churro-hunting until the afternoon.

We finally found an all-day churros place in Seville and grabbed some right before dinner. Perfect timing, eh? Not really, but who cares?

Have mercy! Fried dough gets me every time. You break them off and dip them in the thick hot chocolate. Ayiiiii!!

Granada had a whole different batch of flavors to try. You’ve got the North African/ Middle Eastern influence going on. I had some fantastic falafel and hummus, which I forgot to photograph. Also, there was LOTS o’ mint. Like this mint tea, served all over town, always in a silver teapot with a painted glass:

That green thing poking out of the pot is mint. Yeah.

Granada was also the site of the best mojito ever. It had absolute loads of mint and lime. It was almost like a limeade, which maybe is why I liked it so much. Those green flecks you see are shredded mint leaves.

Also had some yummy sweets from a Granada bakery. An orange spice cake:

These are some baklava-type pastries with different fillings. The top one I think had pistachios while the second was filled with sesame.

By the time we left, the kids were reminding me to take photos of everything we ate. Sadly I forgot a few beauties, though. Not pictured: sea bass baked under a mountain of sea salt, Spanish tortilla (a bit like a potato omelette or frittata), chicken curry on couscous, plenty of Serrano ham, and olives, olives, olives. I was never much of an olive eater before Spain. It’ll do that to you.

What about you? Have you discovered any new foods while traveling? Things you just had to recreate back home?

For more of my travels, click here. A bit more on Spain to come.

On our recent trip through Andalusia, Mijas (“MEE-haass”) was a highlight. One of the lovely white towns (so-called because of their white buildings) Mijas has great food, donkey and horse rides, and best of all, a Wednesday noontime flamenco performance. 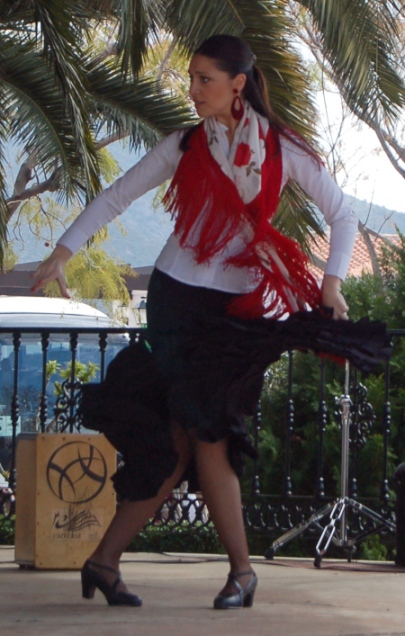 The electricity of flamenco is contagious. These dancers and musicians are true artists. If we’d spent any more time in Spain, I seriously would’ve had to sign up for flamenco lessons (you can, by the way, do this). The performance made me want to hop up and do some serious DANCING!

Here’s a view of Mijas from the hill—-you can see why it’s called a “white town.”

On another day we happened upon the flamenco floor of a department store. “Happened upon”—who am I kidding? Once I heard there was such a thing as a “flamenco department” I was making a beeline. Ahhh….heaven! 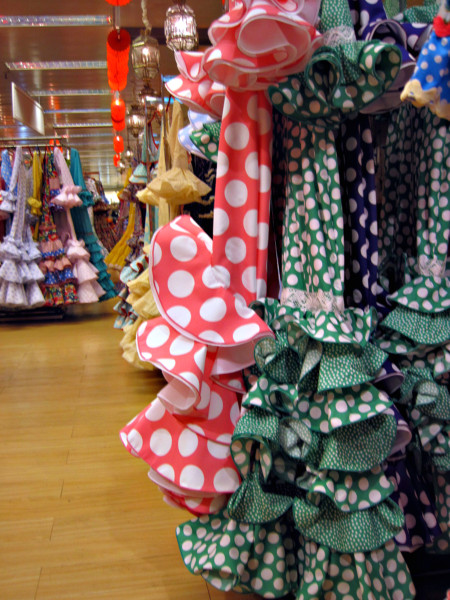 Talk about serious artistry. All handmade. One of these babies will set you back around 500 euros or more. I couldn’t QUITE justify the money. But we did get a cheapo version for Little Miss. 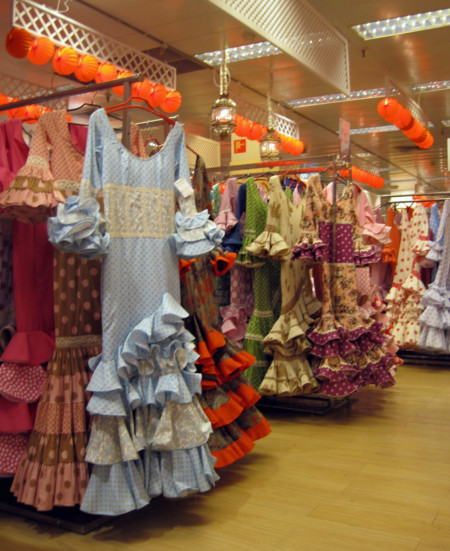 I think I’ve got to learn some flamenco sewing techniques now. So far the internet hasn’t been all that helpful, so shout if you know any tricks.

More on Spain to come. For more on our travels around Europe, just click on the “Travel” category on the right.

Currently reading Hemingway’s A Moveable Feast, a recommendation from my husband. I’m still not a total e-book lover, but it WAS awesome to be able to pull up The Sun Also Rises,W. Irving’s Tales of the Alhambra, and The Big House by Carolyn Coman while in Spain. I love traveling by book and car/plane at the same time.

Hope you have a great weekend!