The spring Waldorf basar, with crafts, kid activities, and yummy food, happened a few weeks ago. It was our last one before we move back to the U.S., which makes me a little sad. There is really nothing like a Waldorf basar, and there aren’t any Waldorf schools or kindergartens in Charlotte that I know of.

The Waldorf handicrafts are so different from what I’d seen before, so very German, and all from natural materials. The rabbits above were what I made this year. You wouldn’t believe the hours that go into making one tiny bunny.

Below are some feather babies, who are sleeping in painted walnut shells: 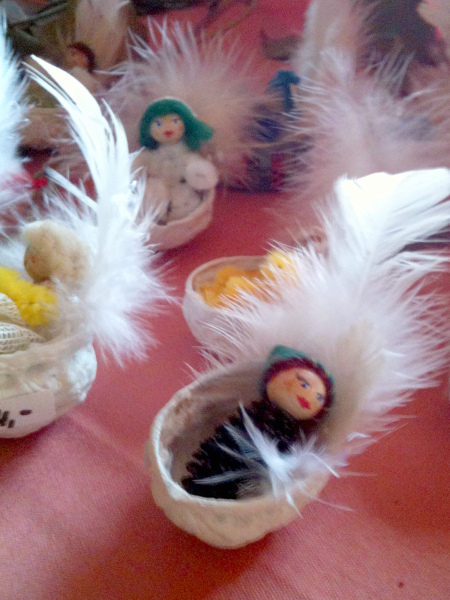 and my personal favorite this year, deer: 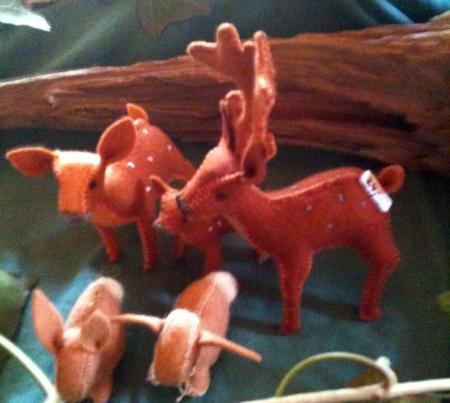 The bunnies in front of the deer are mine, thankyouverymuch.

I just bought Stofftiere zum Selbernähen (Stuffed Animals to Sew Yourself) by Karin Neuschütz so I can make some more animals on my own. It has patterns for camels, donkeys, giraffes, pigs, everything–except deer, which bums me out. I’ll have to find that pattern somewhere else. Looks like the book is only available in German, but you really only need the patterns and a blanket stitch to make them. She does have a few other titles that have been translated, looks like.

I also just bought Hütten von Kindern Selbst Gebaut (which translates something like Huts Children Can Build Themselves) by Louis Espinassous. I think it may be originally French. Anyway it’s all about little forts kids can build out of sticks, brush, or scrap wood. For some reason, after seeing this one, I am kind of determined for the kids to have a fort in Charlotte, though maybe I just want one to play in myself.

I got some good writing done this week. Trying to get as much done as possible before our move. The weather has been amazing this week, after a long, long winter. We hope to get in some bike riding this weekend. Have a great one!