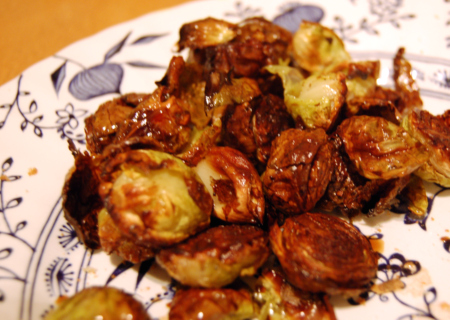 I had never, ever cooked brussel sprouts. I always thought of them as something kids on tv were forced to eat. I had never even knowingly seen them in real life until eating them a few years ago at a fantastic restaurant in Charlotte, NC (Rooster’s). I dreamed about those brussel sprouts for months (no, seriously, I did! Scout’s honor!) but never tried to recreate them. They were cooked in bacon fat, I’m pretty sure. Sigh. Oh bacon fat, I love you, but sadly, you are not an everyday food.

We didn’t have any bacon in the house anyway, and the stores were closed for the weekend by then, so I pulled out my trusty How to Cook Everything Vegetarian by Mark Bittman, and sure enough, there were three brussel sprouts recipes.

This is the one I had the ingredients for: Roasted Brussel Sprouts with Garlic

Yum! Winner! The kids wouldn’t touch them, but they were pretty curious about them.

One note on the recipe. Though the sprouts are supposed to be browned in the end, I would check them several times during cooking to see when they get tender. They can get too brown, and it’s hard to judge from the recipe instructions. The ones you see here are actually a little bit too brown, and this is when they start to get a little bitter. I actually made the recipe twice last week, and the second time I cooked them for a bit less time on a bit lower temp, and they were even better. Our convection oven makes things a bit tricky to calculate, as it cooks faster and the temps usually need to be adjusted.

Like I said, they should be brown, but take them out when they’re all the way tender. The balsamic vinegar really makes it here. I think they could use even a little more garlic, since you’re really just using it to flavor and not eating it (at least we don’t eat whole cloves—-maybe you do—no judgment. I love garlic).

I’d like to try the other sprouts recipes, too. And I’m thinking this nut topping would be awesome with the sprouts since it has a wonderful bacon-y like crunch and flavor. Mmmm…here I am dreaming of brussel sprouts again. Good thing they’re in season right now. Thanks, hubs, for the inspiration.

Here they are in the pan in step 1 of the recipe. Aren’t they cute? 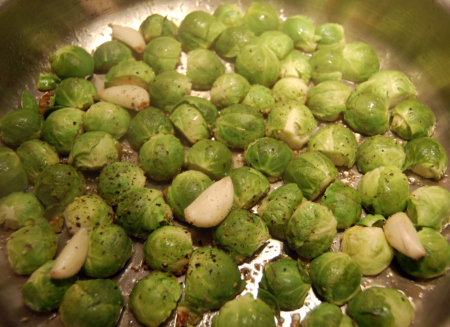 9 thoughts on “Brussel Sprouts by Request (?!)”